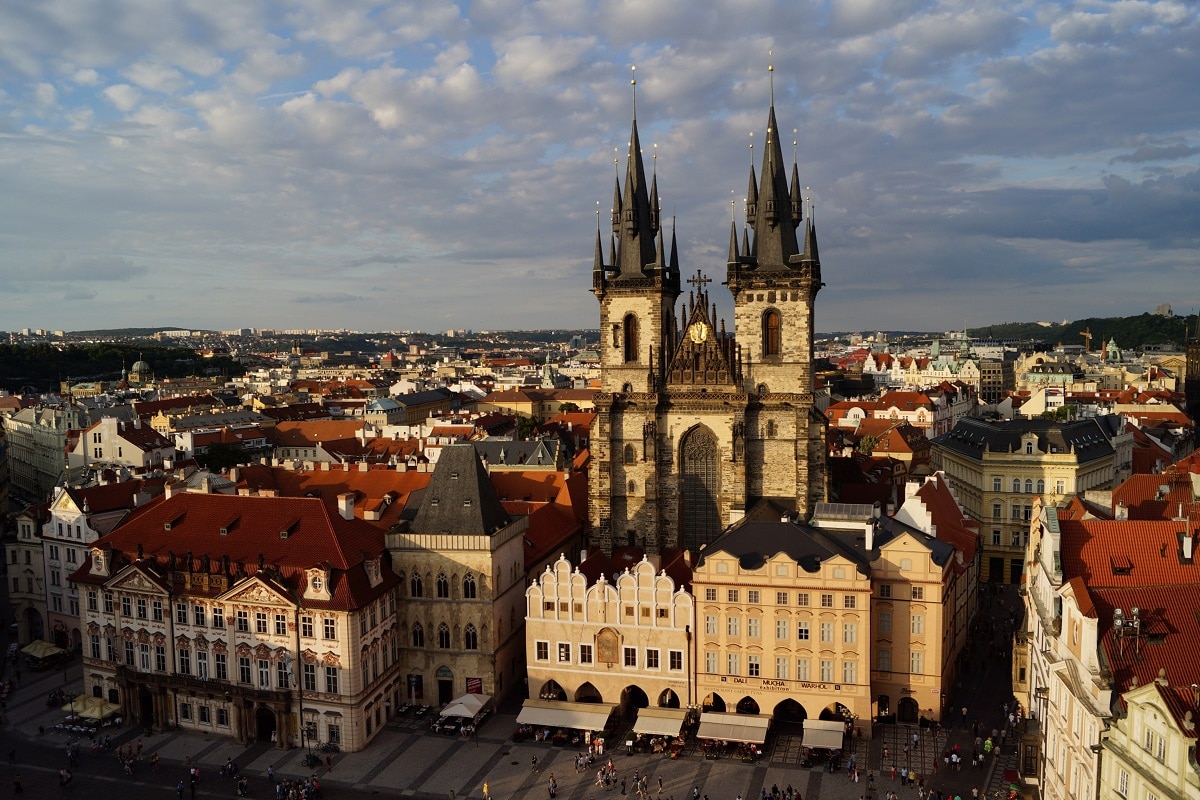 Located in Prague’s Hradcany neighborhood, Prague Castle (Pražský hrad), once the home of Bohemia’s kings, is today the official residence of the Czech Republic’s President and one of the city’s most visited tourist attractions. Originally built as a walled fortress around AD 870, the castle has changed dramatically over the years and contains examples of most of the leading architectural styles of the last millennium. Within the castle walls are a number of Prague’s most popular tourist sites, including St. Vitus Cathedral, St. George’s Basilica, the Powder Tower, the Old Royal Palace, and the Golden Lane. One of the top things to do at night in Prague is to find a good spot from which to enjoy the castle illuminations that light this magnificent structure in a range of hues.

One of the most recognizable old bridges in Europe, magnificent Charles Bridge (Karluv Most) boasts 32 unique points of interest along its 621-meter span. Built in 1357, the bridge has long been the subject of a great deal of superstition, including the builders having laid the initial bridge stone on the 9th of July at exactly 5:31am, a precise set of numbers (135797531) believed to give the structure additional strength. For added good measure, it was constructed in perfect alignment with the tomb of St. Vitus and the setting sun on the equinox. The bridge is particularly famous for its many fine old statues. Among the most important are those of Holy Roman Emperor Charles IV and John of Nepomuk, the country’s most revered saint, unveiled in 1683 (a more recent superstition involves rubbing the plaque at the base of the statue for the granting of a wish). Other highlights include spectacular views over the River Vltava and the structure’s superb Gothic gates. Viewing Charles Bridge at night is also highly recommended.

Idyllically perched on the banks of the River Vltava, Prague’s National Theatre is a must-visit for lovers of the performing arts. Home to the country’s top opera, ballet, and drama performances, the National Theater was opened in 1881 as a symbol of Czech national identity and to promote the Czech language and culture. Despite a somewhat checkered past that saw the building destroyed by fire and even closed by the communists, this stunning theater has undergone extensive renovations and stands as a monument to the city’s rich talent and cultural significance. (English language guided tours are available).

Another Prague theater of note is the Estates Theatre (Stavovské divaldo), built in the late 18th century in Neoclassical style and once a favorite of Mozart, who chose to premier Don Giovanni here.

Situated within the grounds of Prague Castle, the Roman Catholic St. Vitus Cathedral (Katedrala St. Vita) is the Czech Republic’s largest and most important Christian church. Seat of the Archbishop of Prague, it’s also home to the tombs of numerous saints and three Bohemian kings. Founded on the site of a Romanesque rotunda built in AD 925, the cathedral was started in 1344 and took more than 525 years to complete, resulting in a mix of modern Neo-Gothic and 14th-century Gothic styles, along with Baroque and Renaissance influences (be sure to keep an eye out for the impressive gargoyles adorning the exterior of the cathedral).

One of Prague’s most recognizable buildings is the Church of Our Lady before Týn (Kostel Matky Boží pred Týnem), often abbreviated to simply Týn Church. Unmistakable for its twin 80-meter-tall spires flanking each side of the building (each supporting four smaller spires), its main entrance is through a narrow passage past the houses obscuring its façade.

Although completed in the 15th century, the church was altered numerous times through the centuries as the city’s allegiances changed, and while interior renovations are ongoing, there’s still much worth seeing, including numerous fine tombs, the superb Gothic northern portal with its Crucifixion sculpture, early Baroque altarpiece paintings dating from 1649, and one of Europe’s finest 17th-century pipe organs.

Looking like something out of a fairy tale, the Vyšehrad fortress—literally translated as the “Upper Castle,” or the “Castle on the Heights”—stands high above the Vltava River overlooking Prague. Known to have been in existence as far back as the 10th century, it has long been the subject of myth and legend, including the foretelling of an ancient princess of the rising of a great city around it. Once the royal residence of Vratislav II, Vyšehrad also played a role as part of the original Royal Route taken by kings about to be crowned, Although now largely ruins, the fortress is a wonderful place for a stroll or picnic and offers superb views of the surrounding city. During the summer months, the attraction’s open air theater hosts musical and theatrical performances. English language guided tours can be arranged.

Perhaps one of the city’s most unlikely attractions, Prague’s Lennon Wall has stood since the 1980s as a tribute to former Beatle and peace campaigner John Lennon. Things got started almost immediately after the singer’s murder in 1980, when this otherwise unassuming wall near the Charles Bridge became a place for fans to demonstrate their grief, painting pictures, lyrics, and slogans attributed to the star.

Despite police efforts to erase the graffiti—Czechoslovakia, as it was then, was still under communist rule—the memorial wall kept reappearing, and the site became a symbol of hope and peace for the city’s population. The tradition continues to this day, and along with gatherings on the anniversary of Lennon’s death, tourists can frequently be observed adding their sentiments to the wall.

The Prague Municipal House (Obecní dum) is widely considered one of the finest examples of Art Nouveau in the city. Built in 1912, this splendid civic building is also home to one of Prague’s most important (and largest) concert venues, Smetana Hall, and boasts numerous striking features, from its sumptuous façade with a large mural on the arch above the second floor balcony, to the large dome that rests behind and above the arch.

The interior is equally impressive and includes many fine stained glass windows and important paintings. While English language guided tours are available (including a chance to see otherwise closed ceremonial rooms), one of the best ways to enjoy this landmark is to take in a concert or sample its café, restaurants, and luxury boutique shops.

A highlight of Prague’s New Town (Nové Mesto) district—an area that grew out of the city’s need to expand as it prospered—is the wonderful Wenceslas Square (Václavské námestí), home to the National Museum and numerous other architectural treasures. Named after the patron saint of Bohemia, whose statue can be seen here, Wenceslas Square was created in the 14th century during the reign of Charles IV as a horse market and has since become one of the city’s most important public spaces, still used for demonstrations and celebrations alike. A visit today is a fun experience and undoubtedly one of the top free things to do in Prague, and will introduce visitors to some of the city’s best dining and restaurant experiences, as well as great shopping. If you are visiting Prague in December, it’s also the site of the city’s largest Christmas Market.

The Strahov Monastery and Library (Strahovsky kláster) dates back to the 12th century and is the second oldest monastery in Prague. While its imposing gateway and churches are impressive enough, its most important buildings are its two beautifully decorated Baroque libraries. The Philosophical Library contains a variety of extraordinary furnishings, along with an exquisite ceiling painted by Franz Anton Maulbertsch entitled Enlightenment.

The second library, the Theological Library, consists of a splendid Baroque room with a beautiful ornate painted ceiling by Siard Nosecky, a Strahov Monk, along with superb ceiling frescoes framed by detailed stucco work. The libraries contain many rare old volumes and manuscripts, including the famous 9th-century Strahov Gospel, while in the cellars are old printing presses along with the remains of St. Norbert, founder of the Premonstratensian Order.

Also of note are the cloisters, which house a religious art collection and treasury, as well as the fascinating Strahov Cabinet of Curiosities, notable for its displays of historic artifacts from science. English-language tours are available. If you want to linger a little longer, consider dining at the Great Monastery Restaurant, or participate in one of the daily masses.